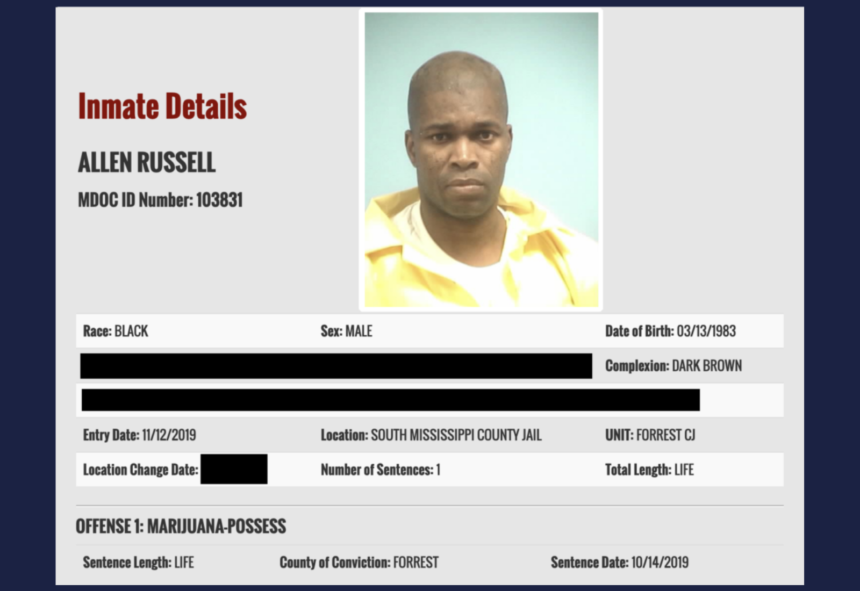 In May 2021, we wrote about the injustice of the Mississippi Court of Appeals affirming a life sentence without eligibility for probation or parole in the case of Allen Russell. Mr. Russell was found in possession of 43 grams (1.5 ounces) of marijuana. A legal basis for Mr. Russell’s brutal sentence was the fact that he had two prior felonies. Morally, however, the sentence was shocking and led to widespread outrage and condemnation.

Mr. Russell’s attorneys appealed his sentence to the Mississippi Supreme Court. The Pro Bono Committee of the International Cannabis Bar Association (“INCBA”) filed an amicus brief in support of Mr. Russell. You may find the brief here. (Full disclosure: I am a member of that Committee and provided some assistance with the brief, which was principally authored by Michelle Mabugat with the assistance of then-law student Christopher Clark.)

I am sorry to report the utter travesty that Mr. Russell’s sentence will stand, and that he will spend the rest of his life in a state prison.

In May 2022, a majority of the Mississippi Supreme Court affirmed Mr. Russell’s life sentence without eligibility for probation or parole over the dissent of several justices. An appeal to the Supreme Court of the United States is Mr. Russell’s only avenue for relief. For several complicated legal reasons that I won’t get into, such an appeal has virtually no chance of being granted certiorari (review).

Instead of a critique of the Mississippi Supreme Court’s opinion, affirming Mr. Russell’s life sentence without eligibility for probation or parole for possession of 43 grams of marijuana, I exhort you to read The New Jim Crow, Mass Incarceration in the Age of Colorblindness by Michelle Alexander. Or watch 13th, the powerful documentary film directed by Ava Duvernay. Those pieces of work will better explain how in this day and age—where you can buy shares in a publicly traded marijuana company—that a person of color ends up in prison for life with no chance of ever (ever!) getting out because of 43 grams of marijuana.