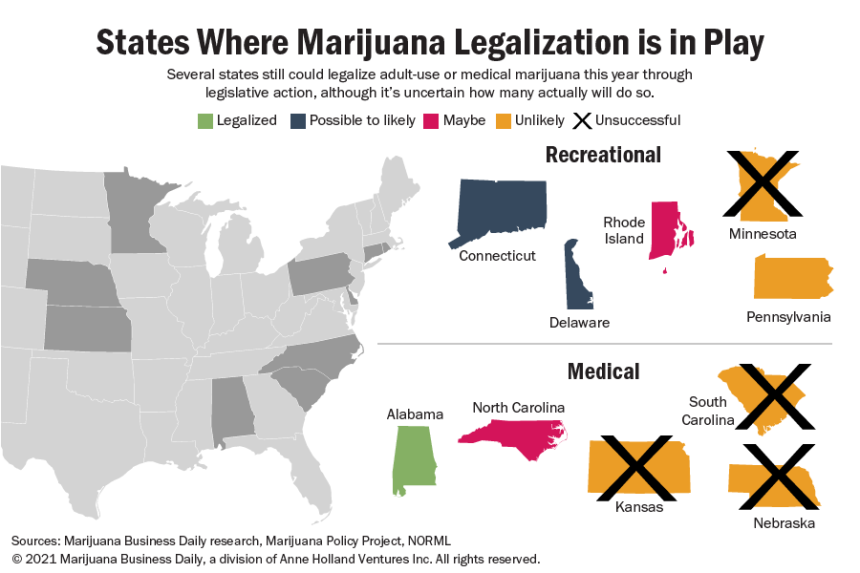 (MJBizDaily takes a weekly look at marijuana legalization and reform efforts across the U.S. while state legislatures are in session.)

Connecticut lawmakers are expected to consider a recreational marijuana legalization bill this week as a June 9 deadline for passing the measure looms.

In Rhode Island, a House lawmaker introduced an adult-use legalization bill that would allow existing medical marijuana dispensaries to begin recreational sales as soon as this summer.

Mississippi’s top election official won’t challenge a state Supreme Court ruling that voided a 2020 voter-approved medical marijuana initiative. The question now is whether the governor will call a special session for lawmakers to consider the issue.

In Texas, lawmakers passed a medical marijuana expansion bill. However, the measure is a slimmed-down version of the initial legislation, with a lower THC cap and fewer new medical conditions approved for treatment.

Lawmakers will consider recreational marijuana legalization this week, as the June 9 deadline for passing and sending a bill to Gov. Ned Lamont creeps up, New Haven TV station WTNH reported.

Lamont’s legalization proposal, SB 888, currently is before the Senate Appropriations Committee after having been advanced in April by the Judiciary Committee.

Negotiations have been ongoing between key lawmakers and the governor’s office over the bill, according to the Washington DC-based Marijuana Policy Project.

Here are key elements of Lamont’s original version, according to MPP:

House Rep. Scott Slater introduced a bill last week that would allow regulators to begin issuing 15 adult-use retail licenses as soon as July 1, with five of those permits set aside for social equity applicants and another for a worker-owned cooperative.

Most other retail stores would be delayed from opening until 2025.

A hearing on the measure is expected in the next week or so.

The governor’s proposal calls for 25 stores to be licensed annually for three years through a state-run lottery. The measure also calls for 20% of the new licenses to go to minority-owned businesses.

The Senate bill could create up to 150 store licenses, but the timing would depend on the creation of a new Cannabis Control Commission.

The legislative session is scheduled to end June 30.

“Rather than giving a sense of false hope and spending taxpayer dollars to no avail, I strongly encourage the governor to reconvene the Legislature in an effort to quickly preserve the will of Mississippians on a few important issues,” Secretary of State Michael Watson said.

Gov. Tate Reeves, a Republican, hasn’t said whether he will do so.

The state Supreme Court ruled in mid-May that the medical marijuana referendum was invalid because it didn’t meet a constitutional provision for the initiative process. That provision is impossible to meet because it’s based on an outdated congressional districting formula.

Texas lawmakers passed a watered-down medical marijuana expansion bill that would raise the THC cap from 0.5% to 1% and add all types of cancer and post-traumatic stress disorder (PTSD) as qualifying conditions.

The Texas House approved the amended Senate version on May 28 and sent it to Gov. Greg Abbott for his signature.

Senate lawmakers watered down a measure that the state House had overwhelmingly passed in late April.

The Senate-amended measure lowered the THC cap from the House version of 5% and eliminated chronic pain as a qualifying condition. Chronic pain generally is one of the leading conditions that qualify to be treated with MMJ.

currently doesn’t recognize Texas as having a viable MMJ program, and it’s unclear whether the minor reforms will be enough to make it so.

The number of MMJ patients in Texas stood at only 5,413 as of April, according to state data. 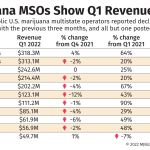