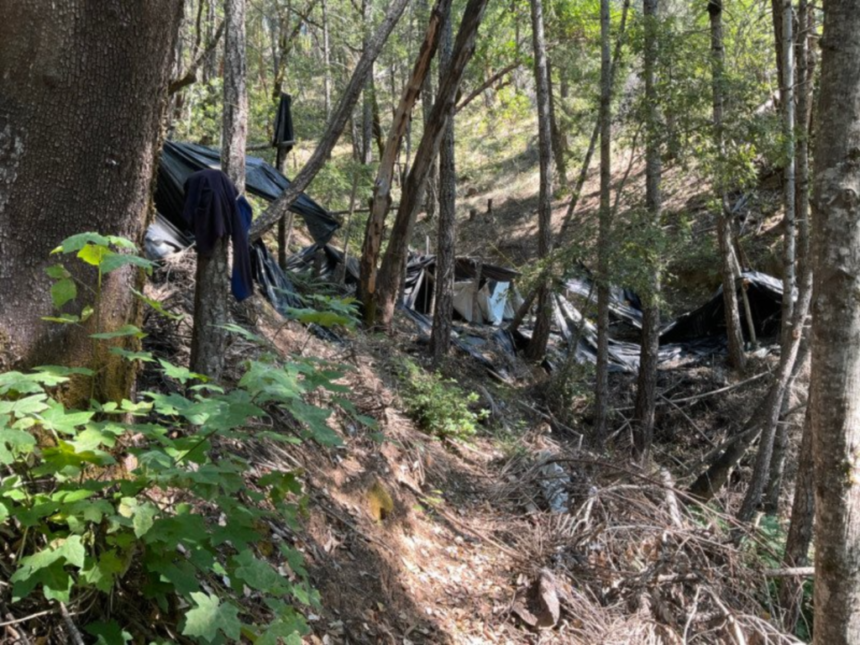 Cannabis processing tents and trash in a water drainage. [All images from MCSO]

During the week of 07-11-2022 through 07-15-2022, the County of Mendocino Marijuana Enforcement Team (COMMET) served several search warrants on multiple illegal cannabis cultivation sites throughout Mendocino County.

All locations where search warrants were served were cannabis cultivation sites without state or local permits to cultivate and COMMET was provided assistance by the following agencies:

In all, 165,219 cannabis plants were eradicated with 5,946 pounds of processed cannabis being seized.

There were 59 separate environmental crimes identified by Department of Fish and Wildlife environmental scientists who assisted in the investigations.

There were a total of 12 firearms seized, 3 of which were personally manufactured firearms (Ghost guns) and 2 were classified by the State of California as “Assault weapons.”

There were people detained at various locations during the investigations into the cultivation sites, and several of them were from outside the United States. These included such countries as Mexico, Spain, [Israel], France, and Argentina.

These cases are still under active investigation and no further information is available for release at this time.

Anyone with information about operations of illegally cultivated marijuana coupled with environmental crimes are encouraged to the contact the Mendocino County Sheriff’s Office by calling 707-234-2100 or the WeTip anonymous crime reporting hotline at 800-782-7463.