Elliot Lewis, CEO of Catalyst Cannabis Co., at one of its dispensary locations in Long Beach on May 27, 2022. Lewis is leading the charge for voters to overrule local officials who oppose retail sales of cannabis. Photo by Alisha Jucevic for CalMatters

Some California cannabis companies are going directly to voters to get around local officials opposed to dispensaries. The epicenter for the effort is in Manhattan Beach and three nearby cities in Southern California.

It’s a common habit among the young parents that Kadera knows in Manhattan Beach, the upscale Los Angeles suburb where she moved last year to raise her two elementary school-aged children in a more family-friendly environment.

But there are no dispensaries in the city; officials banned them five years ago after voters legalized recreational cannabis in California, concerned about attracting criminal activity and advertising aimed at minors. So Kadera stops at a store on her way to and from the Westside L.A. hospital where she works.

Changes loom if Manhattan Beach residents approve an initiative this fall to allow as many as two licensed cannabis businesses. It has triggered an increasingly acrimonious battle between a local entrepreneur eager to gain a foothold in a fresh market and city leaders determined to protect what they see as the character of their community.

“They do like to keep us in a bubble,” Kadera, 40, said one evening as she strolled with her dog along the Strand, a beachside path lined with multimillion-dollar homes. “But the reality is, there’s widespread use, so it would be nice to have it around here.”

Rapidly shifting attitudes — and a nascent legal industry still struggling to stabilize itself — have thrust cannabis back onto ballots across the state, six years after voters approved Proposition 64 to authorize Californians who are at least 21 years old to buy, grow and use it for recreational purposes.

A provision in that 2016 measure gave local governments discretion to ban cannabis businesses — and the vast majority of them did. More than 60% of cities and counties do not allow retail sales, according to the state, and while most of California’s most populous places do permit dispensaries, there are strict limits in many of them.

Desperate to expand where they can operate and to compete with a still-dominant illicit market, many in the cannabis industry have pushed state leaders to override Prop. 64 and open the entirety of California to retail sales.

But it’s a nonstarter at the state Capitol, where local control generally rules the day. A bill this session that would have only required local governments to permit medical cannabis businesses was quickly scaled back to a guarantee for patient access to delivery options.

So frustrated cannabis users and companies are turning their attention to the local level, launching municipal campaigns to pry open the holdouts, one at a time.

‘Voters have lost their patience’
Hirsh Jain, founder of the cannabis consulting firm Ananda Strategy, has tracked about two dozen cities over the past year — from Red Bluff to Sausalito to Santee — where citizen initiative drives are qualifying for the ballot or pressuring local officials to develop their own ordinances to regulate and tax cannabis sales.

“The ballot initiative is a way to get the elected officials to stare reality in the face that their citizens want this,” Jain said, pointing to a fall 2019 poll from the UC Berkeley Institute of Governmental Studies that found public support for legal cannabis had only increased since Prop. 64. Nearly two-thirds of respondents favored allowing commercial dispensaries in their communities.

“Voters have lost their patience,” he said. “They might be willing to cut their elected officials some slack, but after a while, they’re going to take matters into their own hands.”

Enter Elliot Lewis, a self-described “motherf—ing hustler to the core” and the founder of Catalyst Cannabis Co., which operates 11 dispensaries, mainly in Southern California. He and fellow executives at the company are aggressively pursuing a strategy to force their way into cities that continue to ban retail cannabis sales.

They have funded initiatives to require dispensary licenses in Manhattan Beach and three of its neighbors in the South Bay — Redondo Beach, Hermosa Beach and El Segundo — which each represent a crown jewel of the untapped legal cannabis market: wealthy and touristy, with a voter base that firmly backed Prop. 64. Voters in all four cities will get a chance to weigh in on permitting cannabis sales in either November or next March.

In his profane and zealous style — alternately hilarious and intimidating — Lewis defends his approach as more than a business venture. It is a political statement, a frontal assault on the principle of local control that he believes the “Karens and Chadwick Moneybags” who run city governments worship with Biblical reverence, often flouting the will of their own constituents.

“You’re talking about cocktail-party-donor people. I don’t think they understand where the zeitgeist of the younger generation is,” Lewis said. “You’ve metaphorically got to take a gun to their head, because that’s just how they operate.”

‘It doesn’t fit with our community’
The rising tension over the future of cannabis access in California is perhaps best captured by Manhattan Beach, a surfing hotspot of 35,000 residents, most famous for its iconic concrete pier.

Though 62% of the city’s voters supported Prop. 64, officials remain skeptical about cannabis dispensaries. City council members say there has been no groundswell of demand for retail sales among their constituents, including some who complain about being duped and coerced into signing the initiative petitions.

“It’s about money. There’s a lot of money in the South Bay and the dispensary owners know this,” Mayor Steve Napolitano told CalMatters in an email. “So why have pot shops that residents don’t need or want, just to enrich a few owners?”

Stern, a mother of four who said she could not remember how she voted on Prop. 64, called it “distressing” that retail cannabis sales might be imposed by outsiders whose values do not fit with Manhattan Beach’s “small-town, family-oriented nature.” The city banned public smoking and tobacco sales in recent years — rare steps even for liberal California — to reduce beach pollution and vaping by students.

“I do not feel that the retail sale of cannabis in Manhattan Beach is appropriate,” Stern said. “I really am concerned about how access increases normalization to our youth.”

‘It cheapens a high-end beach town’
That sentiment has framed the public debate in Manhattan Beach, which prides itself on its top-performing schools.

Loading up her car with groceries outside the Vons downtown, Amy McAvin, 51, a bookkeeper who has lived in the city her whole life, said she worries about cannabis becoming even easier for kids to get.

A mother of two teenagers, McAvin assumed her children would use cannabis, so she encouraged them to develop safe habits, such as only smoking in social situations and not driving afterwards. She said she smoked herself when she was younger and voted for Prop. 64, but “I just don’t really condone it.”

“I’m not going to be out there picketing” if the initiative passes, she said. “We could just put other things in place of a dispensary.”

The litany of objections around town is long: The community is too residential. Dispensaries would attract undesirable visitors. It would be hypocritical to allow cannabis sales after banning tobacco. Those who want cannabis can already easily get it by delivery or driving to a nearby city.

Manhattan Beach resident Charlene Harding, who said she opposes cannabis shops because they don’t fit the vibe of Manhattan Beach, is pictured on May 27, 2022. Photo by Alisha Jucevic for CalMatters

“It cheapens a high-end beach town,” said Charlene Harding, 59, a retired government worker who moved to Manhattan Beach two decades ago. Though she has “never even puffed,” she said she did not care if others smoked — within reason: “I hate when I go to the beach and it smells like skunk.”

The opposition is far from universal, however, despite what city officials say they have heard.

David Sulaski, 54, a retired investment banker who has lived in Manhattan Beach for six years, said the city was full of “fun-loving people” who would embrace dispensaries. 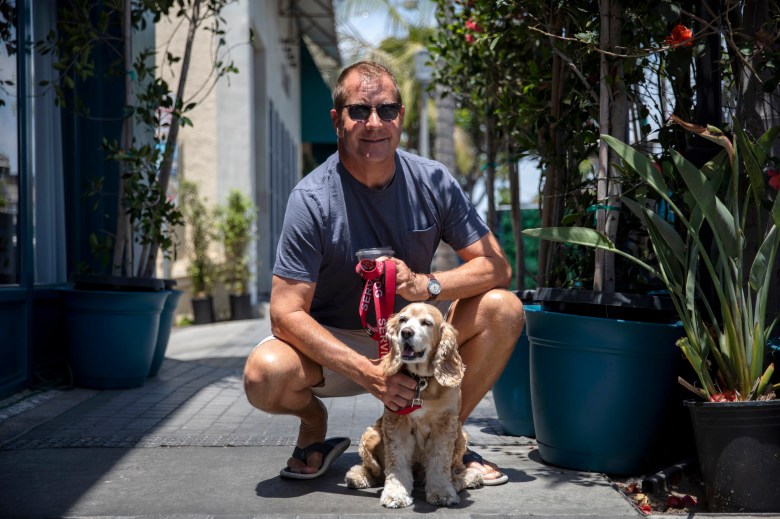 Manhattan Beach resident David Sulaski, who supports cannabis shops opening, is pictured with his dog Stella in Manhattan Beach on May 27, 2022. Photo by Alisha Jucevic for CalMatters

“This is a community that likes to have a good time,” he said as he walked his dog down Manhattan Avenue in the city’s commercial center. “I don’t know why we make decisions that fly in the face of those things.”

Sulaski, who uses cannabis “every day that I can” and gets it delivered, said it was silly to make people go elsewhere to buy cannabis when Manhattan Beach could benefit from the tax revenue.

“We don’t expect our freedoms to be restricted in California. We could live in a red state for that,” he said. “Just give people what they want.”

Tax revenue may be the most compelling reason for cities to finally allow retail sales. Officials in Redondo Beach estimate that each license could generate as much as $1 million per year for the city.

State regulations also require testing cannabis products to ensure they are free of contaminants before they can be sold in licensed dispensaries, a safeguard that does not exist on the illicit market.

Derek Glunts, who grew up in Manhattan Beach, began smoking in high school and bought cannabis that he said was cut with chemicals at an illegal dispensary that presented itself as a church.

“Every single product they sold there was fake. They would turn black within a week and genuinely our lungs would hurt afterwards.” Glunts said. “I had a friend who was coughing up brown stuff from his lungs repeatedly for weeks and weeks after smoking some of the stuff he bought.”

The 21-year-old student was recruited last year to serve as the proponent for the Manhattan Beach initiative by a childhood friend, who had already signed on as a proponent for the petition in Redondo Beach. Both were longtime customers at Catalyst Cannabis.

To Read The Rest Of This Article By Alexei Koseff on CalMatters.org 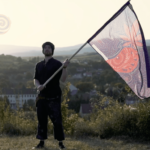 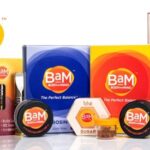