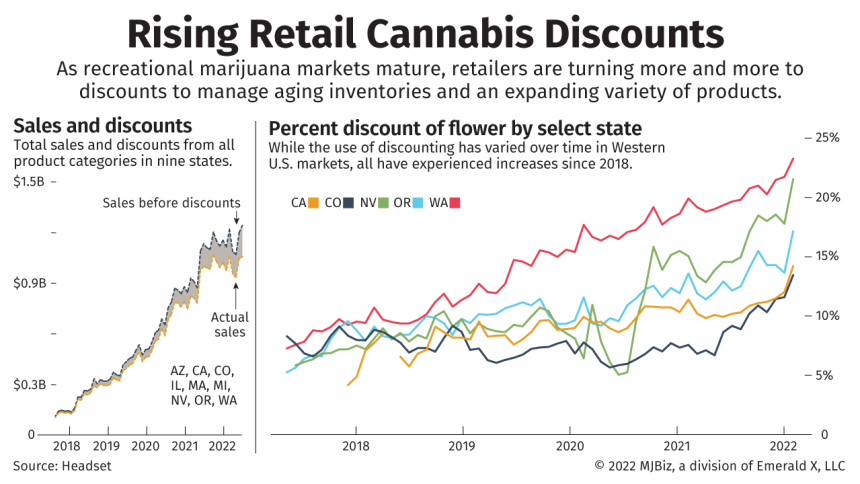 U.S. and Canadian cannabis retailers are discounting their products more and more, forgoing billions of dollars in revenue since the launch of adult-use markets in recent years.

It’s easy to blame recent events such as the COVID-19 pandemic for the price shaving.

But the increase in discounting, according to Krista Raymer, the founder of Toronto-based retail cannabis consulting firm Vetrina Group, likely reflects the rapidly growing number of adult-use brands and products available to retailers.

This has left retailers with a growing number of product options and rising stocks of unsold goods at a time when recreational sales, in particular, have slowed in a number of markets.

In response, retailers are relying on a variety of promotions, discounts and markdowns to boost sales and shrink bulging inventories – this at a time when overall consumer inflation is surging, having jumped 8.3% annually in April.

Raymer believes the cannabis discounting will continue until the industry has more experience and data to make better informed decisions about managing products, prices and inventories.

The combined discount on mainly recreational marijuana cannabis sales in nine U.S. states more than doubled over the past five years, from 7% in June 2017 to 15% in April 2022, according to retail data collected by Seattle-based analytics firm Headset.

Discount percentages vary by product, but all categories have experienced increases since recreational sales started in the various states and Canada.

Cannabis flower, the most popular and top-selling category, had double-digit discounts for April in several U.S. states.

Total flower discounts in Washington state reached 20% for the first time in November 2021 and topped 23% in April of this year.

Nevada also had total discounts on flower of more than 20%.

Among the states tracked, only Massachusetts had comparably low discounts rates.

Learn the fundamentals for getting started in cannabis retail in this comprehensive guide curated by the editors at MJBizDaily with help from industry experts.

Inside the MJBizDaily Retail Buyers Guide:

Canadian consumers might not be enjoying the same discount percentages as U.S. buyers are, but discounts are increasing.

Of the provinces, Ontario had the highest discount percentage, 4.1% in April.

That amounts to almost 5 million Canadian dollars ($4 million) in discounts every month.

The differences in discounts in Canada and the U.S. come from how the supply chains are set up.

Canadian cannabis retailers absorb most of the discounting cost because, in most provinces, wholesale prices are set by government-run provincial wholesalers.

Retailers purchase the product at a fixed price from the wholesalers, but they can sell it at the price they want.

U.S. retailers have more options when it comes to discounting because they can rely on partners to absorb some of the price difference.

Cannabis brands can set up programs such as those in mainstream consumer packaged goods industries, where product producers or distributors absorb the cost of the discount to help expose customers to their merchandise.

At the same time, cannabis discounting coincides with the rapid expansion of product available to retailers in Canada and the U.S.

For example, the number of cannabis products available to U.S. retailers in California, Colorado, Michigan, Nevada, Oregon and Washington state surged 80% from 2018 to 2022, with almost 5,000 brands producing 189,000 products in those states at the end of the first quarter this year.

California experienced a quadrupling in the number of cannabis products available to consumers since 2018, with 39,000 products being sold by retailers in the first quarter of 2022.

Not bad for a market that started in 2019 with about 500 products offered by 64 brands.

But there is a dark side to discounting, Vetrina’s Raymer said.

“Discounting is used as a lever to increase the sales velocity of a SKU,” she said. “The difficulty, though, is you have to increase the velocity enough to offset the cost associated with running the discount.”

And if you can’t do that on a consistent basis, Raymer said, discounting can be very detrimental to the business – and even the industry.

“We have to be really specific with discounting,” she said.

Raymer recommends retailers understand the intended and unintended consequences to discounting and create a pricing, promotion and discounting strategy.

“There’s been some big shifts in discounting – for example, discounting an entire category. Instead, we need to be more targeted with what SKUs we’re discounting when and how much product is available in the store at discount at any given time.”

Andrew Long can be reached at andrew.long@mjbizdaily.com. 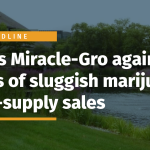 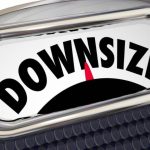