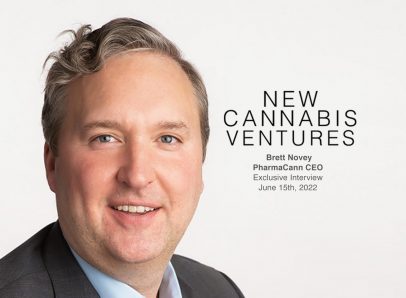 PharmaCann CEO Brett Novey last spoke to New Cannabis Ventures in August 2021. During that conversation, he outlined the private cannabis company’s focus on its people, its foundational assets and its financial discipline. Checking in this year, Novey shared an update on how those three areas remain a focus for PharmaCann.

Historically, PharmaCann focused on winning licenses in limited-license markets. Since 2021, the company has added to its foundational assets through the acquisition of LivWell. The company is navigating the challenging market conditions today by focusing on lean operations and converting working capital into cash. PharmaCann is also prepared to identify distressed acquisition opportunities.

The company’s footprint spans eight states, and it is vertically integrated in each of its markets. PharmaCann has approximately 50 dispensaries and 10 cultivation/manufacturing facilities across Illinois, Ohio, Pennsylvania, Maryland, Massachusetts, New York, Michigan and Colorado. It added Michigan and Colorado to its footprint through the LivWell acquisition.

LivWell’s ability to compete from a cost of goods perspective was attractive to PharmaCann. PharmCann is currently selling an eighth of flower in Illinois for $45 to $50 dollars. In Colorado, the company is selling an ounce for $59 and making a profit, according to Novey. He expects that this pricing is where the industry is heading in the long-term, and he wants PharmaCann to have able to compete at that level in all of its markets. Novey sees significant opportunities for PharmaCann to build upon LivWell’s platform in both Colorado and Michigan.

In New York, the PharmaCann team is awaiting the release final regulations. In the long-term, New York will be a $6 billion addressable market, according to Novey. PharmaCann is expanding its operations with plans to quadruple its output in the state. It will leverage best practices from LivWell to design indoor facilities and produce quality products at competitive prices. The company is aiming to become the leading wholesaler in the state.

The company has three core paths to growth. First, the company is aiming to take a 20 percent share in the Colorado and Michigan retail markets, which would translate to $800 million of additional annual revenue, according to Novey. Next, the company is focused on the growth opportunities associated with existing markets transitioning from medical to adult-use. Once New York, Pennsylvania, Ohio and Maryland make that transition, Novey anticipates a $15 billion addressable market opportunity. Finally, the company has identified seven states beyond its current footprint that could represent an additional $31.5 billion addressable market opportunity. Over the next 24 months, PharmaCann will be focused on those three paths to growth.

M&A has a place in PharmaCann’s growth strategy, but any potential deals will be viewed through the lens of financial discipline. Novey and his team are looking for the highest internal rate of return for shareholders. They will keep this in mind as they consider adding more dispensaries in current markets and moving into new states.

PharmaCann is positioning itself for long-term success without focusing too much on the competitive landscape, according to Novey. The company’s partnership with the Cronos Group and Altria is a part of that long-term strategy. The company does not currently need to take on any additional capital, but it is looking for opportunistic ways to bring more cash to the company to help accomplish it goals, according to Novey.

When Novey last spoke with New Cannabis Ventures, he talked about the possibility of an IPO. He still believes going public would be beneficial for PharmaCann, but the timing of that move remains uncertain. Certain catalysts could help shape the timeline for a public market strategy, such as SAFE Banking and New York recreational sales. The launch of adult-use in markets like Ohio, Pennsylvania and Maryland could also help create a market with the right conditions for an IPO, according to Novey.

Growth Outlook for 2022 and Beyond

Novey anticipates that PharmaCann will double its 2021 revenue this year, pro forma with the LivWell acquisition. In 2023, he expects revenue to grow roughly 50 percent. Adult-use sales in New York will be a major driver of growth in 2023. Illinois and tailwinds from the LivWell acquisition will also be key drivers of the company’s growth story. Despite, challenging macro headwinds, Novey expects PharmaCann to have exponential revenue and EBITDA growth into 2024 and beyond.

In addition to revenue and EBTIDA, Novey is bullish on the company’s cultivation KPIs and its pace of innovation and bringing new products to market. PharmaCann is also driving down its costs to help generate more revenue. In 2023, Novey expects $0.47 of every net incremental dollar of revenue to flow through to free cashflow.

PharmaCann is streaming its business and expanding its footprint. As a part of that process, Novey is focused on communicating with his team to ensure everyone is on the same page as PharmaCann gears up for the next leg of growth, which beings in 2023 with adult-use sales in New York.

To learn more, visit the PharmaCann website. Listen to the entire interview: