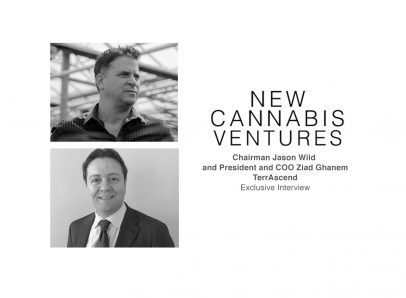 TerrAscend (CSE: TER) (OTCQX: TRSSF) is continuing to execute on its strategy of going deep, not wide, according to Chairman Jason Wild. Three of the company’s key markets, New Jersey, Pennsylvania and Maryland, are set to drive growth with the transition to adult-use. Adult-use sales have already launched in New Jersey, and Pennsylvania and Maryland are expected to make that transition within the next 18 to 24 months. TerrAscend is focusing on its operations there, as well as in Michigan.

Wild last spoke with New Cannabis Ventures in November 2021, and this time, he was joined by President and COO Ziad Ghanem. Ghanem emphasized the competitive advantage of having support from JW Asset Management as TerrAscend continues to build its brands and expand its footprint. Together, Wild and Ghanem discussed TerrAscend’s U.S. strategy and outlook for growth.

Ghanem stepped into his roles with TerrAscend at the beginning of the year. Prior to entering the cannabis business, he spent 17 years working in the pharmaceutical industry. Over the course of his career, he held multiple leadership positions at Walgreens, building experience in operations, strategy and product development. Ghanem saw the impact of the opioid epidemic, and the potential for cannabis to help patients. That personal motivation, combined with the growth opportunity in cannabis, attracted him to the cannabis space.

In addition to Ghanem, TerrAscend has added a number of other leaders to its executive team this year. In February, TerrAscend announced a number of new hires, including Charishma Kothari as Senior Vice President of Marketing. This spring, Lynn Gefen joined the company as Chief Legal Officer, and Jodie Lampert stepped into the Senior Vice President of Human Resources.

In March, TerrAscend entered the Michigan market with the close of Gage Growth acquisition. Already, the acquisition has proven its value, according to Ghanem. He pointed out that while the Michigan market is experiencing pricing pressure, the Gage brand has a 60 to 70 percent premium over where the market is performing. TerrAscend has also launched its wholesale business in Michigan. TerrAscend also announced plans to acquire five additional dispensaries in Michigan. The company plans to grow its business in the state through a hybrid retail and wholesale model.

In April, TerrAscend announced a definitive agreement to acquire a dispensary in Maryland. The company entered the state last year with cultivation and manufacturing operations only with the intention of eventually reaching the four-dispensary cap in the state. The company is not rushing its retail strategy in the state, but it is preparing for adult-use, which is on the ballot in November, according to Wild. The company is planning to have two or three dispensaries by the time the adult-use transition happens. The dispensary it is acquiring this year is in an advantageous location within six miles of three states.

TerrAscend had given guidance that stores in New Jersey would hit a $40 million run rate at some point within the first year of adult-use, and Wild expects that number is not far away, just six weeks into the program.

TerrAscend has the largest selection of form factors in the state; it is the only operator currently approved for concentrates in New Jersey, according to Wild. The company is also taking the Gage brand into new markets. It launched Gage, as well as the Cookies brand, in New Jersey. Following that launch, the company’s sales were up 40 percent week over week, according to Wild. Adult-use sales in New Jersey will likely help to drive revenue growth for the company this year.

In Q3 of last year, the company had to make a number of painful decisions regarding its Pennsylvania operations, according to Ghanem. TerrAscend needed to reset its cultivation, rebuilding its library of strains acquired in December. Then as cultivation was coming online in Q1, the company lost its vape business due to recall. But now, operations in the state are recovering, and Ghanem expects a strong exit this year in Pennsylvania.

The TerrAscend team looks at potential M&A in two categories, first, as a way to go deeper in existing states, such as Maryland. The company is also looking to enter a new market in the next six to 12 months. It is considering everything eastward from Michigan, according to Wild. With the state of the capital markets, he anticipates that TerrAscend will have the opportunity to examine distressed deals.

TerrAscend focuses on building a competitive advantage with the quality of its products, according to Ghanem. That quality translates into engagement with customers and patients and larger basket size. In some states, TerrAscend has great competitors, and in some cases, those competitors are customers through its wholesale business.

TerrAscend reported $88.4 million in cash and cash equivalents with its Q1 results. The company has flexibility from a balance sheet perspective, according to Wild. It owns its facilities in New Jersey and Maryland. TerrAscend is less leveraged than other companies that have done sale leasebacks, and it can sustain better margins because it is not paying high lease prices, according to Wild.

The company is putting capital to work in Pennsylvania, Maryland and New Jersey, the states that will help to drive growth in the coming quarters, according to Ghanem. TerrAscend also has capital projects in Michigan. It is completing an acquisition and a cultivation center and setting up a production lab in the state.

The company is facing the same macroenvironment challenges – inflation and 280E – as the rest of the cannabis industry, but it is looking for ways to operate efficiently and deliver financial results despite the current environment.

TerrAscend looks at important metrics in several different categories. First, the company has specific metrics around team engagement and turnover. Once the company wins with its team members, it can focus on winning and retaining customers and patients. Customer and patient loyalty translate into strong financial metrics. Ghanem also looks to hold the TerrAscend team accountable to metrics around brand and capital project management.

Cannabis Investors Need to Get Ready for These Changes Ahead