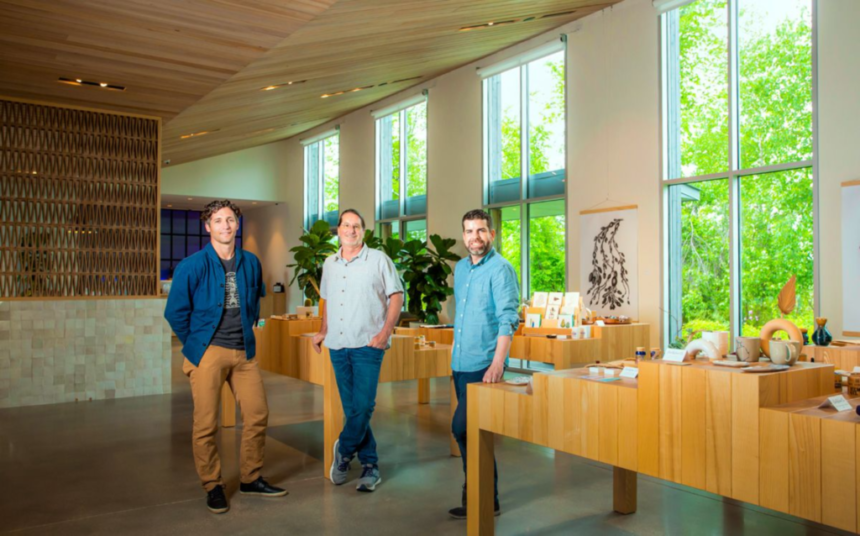 PHOTO / TIM GREENWAY  Left to right: Kaspar Heinrici, director of business development for SeaWeed Co., Scott Howard, owner of SeaWeed Co., and Patrick Boothe, the commercial studio director at Caleb Johnson Studio, in the marijuana dispensary in South Portland. They say the goal at the cannabis shop was to create an approachable environment that dispels the “head shop” image.

A few years ago, the Maine Legislature was inching toward how to regulate the adult-use cannabis market.

Simultaneously, the leadership of SeaWeed Co. was thinking about the design of its first cannabis retail shop at 185 Running Hill Road in South Portland.

“The concept was to make a really welcoming space that felt relaxing,” says Kaspar Heinrici, SeaWeed’s director of business development.

Similar to a spa environment, the design would be Scandinavian influenced with a modern style using warm materials and textures such as tile and natural wood.

That relaxing, clean and open feel was considered essential for the business.

“Because cannabis is relatively new as a legal substance you can buy in a store, we want that experience, whether it’s first-time or returning customers, to feel as inviting as possible,” says Heinrici. “For a brand that focuses on education and the community, we want everyone to feel welcome and able to ask questions and learn.”

No bongs on the wall

The legalization of cannabis has birthed new opportunities for architects.

“We’re trying to make it approachable to both the avid user and the person who hasn’t thought to use it before,” says Patrick Boothe, the commercial studio director at the Caleb Johnson Studio.

Caleb Johnson Studio, which was founded by architect Caleb Johnson in 2006 and is based on Exchange Street in the Old Port, has a team of 30 architects and designers. It is affiliated with Woodhull Construction and Woodhull Millwork. To this point, Caleb Johnson had been better known for its high-end homes, which are often featured in home magazines, and some specialty commercial projects, including store design and the revamp of the Higgins Beach Inn.

Sales of adult-use cannabis were first allowed in October 2020 and in the industry’s first full year in Maine, sales totaled $82 million. This year, sales are on pace to be more than $120 million, with the industry proving a boon to architects, builders, HVAC companies and other vendors.

Moving beyond the ‘head shop’

For the SeaWeed project, Caleb Johnson Studio served as lead architect in collaboration with MAAM, an architecture studio in Los Angeles, on SeaWeed’s Running Hill Road location and its Portland shop at 23 Marginal Way. The projects were carried out by Woodhull Construction and Woodhull Millwork.

“Their product is made in Maine and they wanted their brand and, by extension, their building, to reflect that,” he says. “This wasn’t going to be a place you walk in and see bongs on the wall.”

Starting with the location, the building’s placement along busy Running Hill Road was tucked into a quiet corner overlooking an expansive wetland and nestled among tall grasses.

Though near the South Portland Target store and just over a mile from the Maine Mall, the site was designed to respect the landscape, including the selection of natural plants. The front of the building is deliberately austere from the roadside to create privacy, security and sound protection. Rear windows, nearly 20 feet tall, capture light and the wetland view. A large deck provides outdoor space.

Inside, a bright and open floor plan conforms with certain rules related to cannabis retail while guiding customers through the shopping process.

“You’re not supposed to have cannabis visible right away, so there are screening elements,” says Boothe. “There’s a front desk and a person checking your ID. That’s the first layer of security to comply with the rules.”

Natural materials include white ash for the millwork; a white pine ceiling; and terra cotta wall tiles whose neutral color was selected to integrate with other natural materials. The floor is polished concrete. The 3,200-square-foot space includes wooden ceilings that slope upward from 10 to 17 feet. The geometry is called an “inverted hip ceiling” and includes three planes that require precision joinery where they come together.

The approach was about natural light and warmth.

“When you’re trying to sell a product, we tend to keep things on the lighter side, which puts more emphasis on the product,” he says.