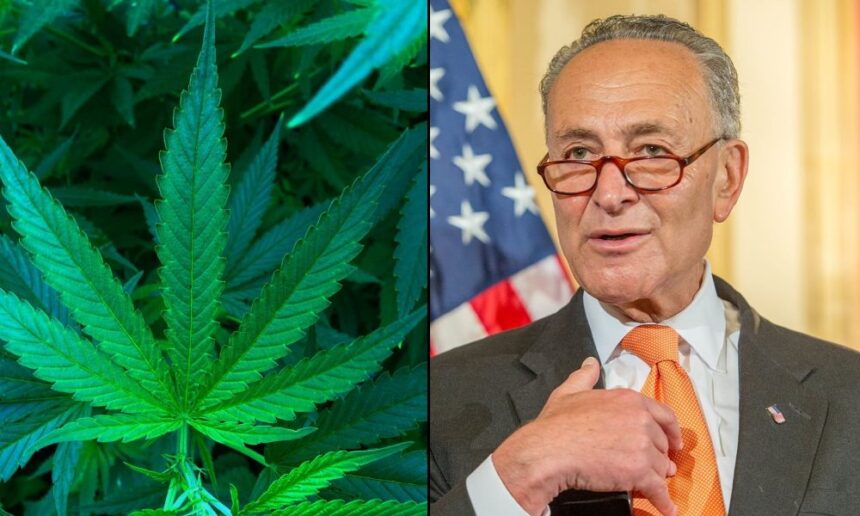 The introduction of a long-awaited Senate bill to federally legalize marijuana is imminent, with two Senate sources telling Marijuana Moment on Thursday that the legislation could be filed “as early as next week.”

But sources on Capitol Hill who are familiar with the planning tell Marijuana Moment that the exact timing is still in flux. It’s possible that the Cannabis Administration & Opportunity Act (CAOA) could drop next week, they say, but there are no scheduled plans to do so at this point, despite what Bloomberg reported. However, they maintain that the bill will be introduced ahead of the August recess just weeks away, as Schumer has promised.

The timeline for the introduction of CAOA has been repeatedly pushed back as leadership has worked to gather input on various provisions and build bipartisan buy-in. The majority leader had said earlier this year that CAOA would be filed in April, but that did not pan out. He then amended the timeline and made a “promise” to bring the bill forward ahead of the recess.

Details about any changes to the bill since it was released last year are still being heavily guarded. But it’s expected to contain the key components: removing cannabis from the Controlled Substances Act, imposing a federal tax on marijuana sales, promoting equity in the industry and providing an avenue for relief for those who have faced federal cannabis convictions.

Once the measure is introduced, its path to passage is still murky. There’s a fair level of skepticism about the prospects of reaching the 60-vote threshold needed to pass CAOA through the Senate.

Republican senators are generally expected to oppose a measure that would deschedule cannabis, especially if it involves imposing a federal tax and using revenue to meet equity objectives. At the same time, it’s far from certain that all Democratic members of the Senate will back the legislation, as several members have been either non-committal or indicated that they’d oppose it based on the original draft language. Democrats hold a slim majority in the chamber, so any dissent within the caucus could jeopardize the bill’s chances of passage.

But Schumer says he isn’t deterred by those political obstacles, or at least is unwilling to break his promise to bring the bill to the floor for a vote. A year of coalition building—in concert with bipartisan offices, advocacy groups and stakeholders—is moving the legislation in the right direction, he’s signaled.

Support for comprehensive legalization on the House side is already there, as the chamber voted in April to pass a similar measure called the Marijuana Opportunity, Reinvestment and Expungement (MORE) Act. It stands to reason that CAOA would also enjoy majority support if it manages to clear the Senate.

Last year, Schumer also emphasized that CAOA will specifically seek to restrict the ability of large alcohol and tobacco companies to overtake the industry.

That bill has passed the House in some form seven times at this point, but Schumer and colleagues have faced criticism over their insistence that broad reform must be enacted first, both as a matter of social justice and because they’ve feared that passing the banking bill first could compromise GOP support for CAOA.

Additionally, there are reportedly plans in the works to advance an alternative omnibus cannabis reform package if CAOA doesn’t garner enough support to be enacted. Offices in both chambers are said to be discussing a plan to advance what would effectively be a marijuana minibus of incremental reforms, addressing issues like cannabis banking protections, Small Business Administration (SBA) access and marijuana research, for example, but stopping short of descheduling cannabis.

In June, Rep. Dave Joyce (R-OH) had a meeting with Schumer to go over possible paths forward for interim reform like the SAFE Banking Act or the HOPE Act, which he’s sponsoring alongside Rep. Alexandria Ocasio-Cortez (D-NY). That measure would incentivize states and local governments to expunge cannabis records in their jurisdictions.

Meanwhile, a GOP congresswoman, Rep. Nancy Mace (R-SC), filed her own legalization bill last year titled the States Reform Act (SRA) that shares similar provisions to the Democratic-led proposals. It has not received committee consideration, but if the House flips following the midterms, some feel it could be a vehicle for reform should Republican assume control of the chamber.

There are serious questions about the prospects of passing any broad legalization bill in the current congressional climate, especially given the steep Senate vote threshold. But another looming question is what President Joe Biden would do if a legalization measure does ultimately arrive at his desk.

Despite supermajority support for the reform within his party, the president has maintained a firm opposition to adult-use legalization. Instead, he’s voiced support for modest changes such as decriminalization, rescheduling and continuing to allow states to set their own policies.

After more than a year in office, however, he’s yet to take any meaningful steps to make good on those campaign pledges. And days before the House passed the MORE Act in April, then-Press Secretary Jen Psaki reaffirmed that Biden’s position on legalization has not changed.

That said, the White House drug czar recently said that the Biden administration is “monitoring” states that have legalized marijuana to inform federal policy, recognizing the failures of the current prohibitionist approach.